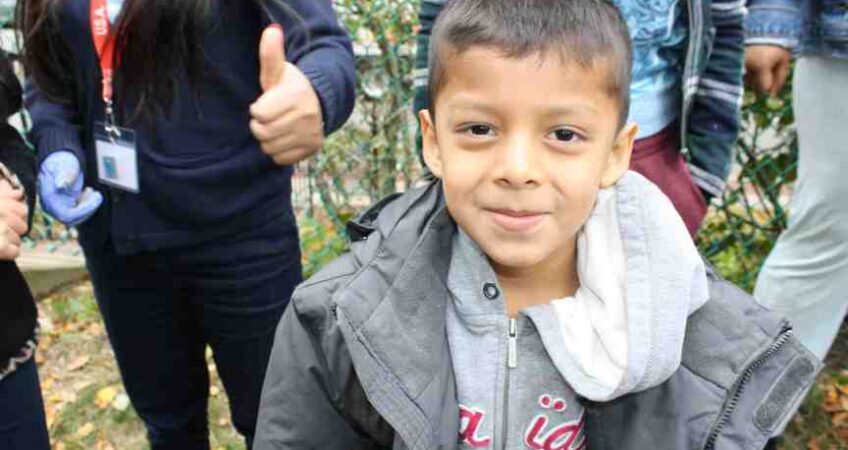 Posted by sgitwboss In Blog 0 Comments

Unaccompanied children from Central America are seeking asylum in the United States and have nowhere to go. What can we do? Perhaps it is not about what we do, but what we don’t do.

I have the honor of working with the ‘other’ refugees – the ones we haven’t been hearing about in the news recently.

The children in my programs are unaccompanied minors from Central America. They were detained at the border after fleeing gang warfare and human trafficking in El Salvador, Guatemala, and Honduras. They are ages 6 and up, boys and girls, sometimes siblings, sometimes a cousin looking after little ones, crossing the border on foot. They are seeking asylum in the United States.

This kind of journey has been going on for many years, but I’ve had the privilege of working with these children for the past three years. That is, until today.

On February 1, 2017, the U.S. Office of Refugee Resettlement, a federal agency, cut the funding for these children to be housed in the shelter where they have been temporarily kept safe until they could be legally resettled with family members or sponsors in the US. The ORR called the shelter at 5:30 p.m., technically after hours on a Wednesday, and gave the director 2 hours to remove the children from the safe house.

What will happen to the children, who were midway through the process of being resettled here? They will be transported back to the border, most likely to a detention center in an airplane hangar, which is neither safe nor appropriate for children.

Three years ago, the shelter approached me to ask if I would please help teach the refugee children from Central America about our food system and how to live sustainably here. I had already been leading farm-based education programs for several years for at-risk teens removed from their homes by the Dept. of Social Services for reasons of abuse. The shelter felt that if I were to guide the refugees, it would help make the program a successful one.

The Central American refugees were only supposed to be kept for 21 days in the airplane hangar that served as a detention center.

They would sleep on a concrete floor with nothing but an emergency blanket.

There were no showers, no changes of clothing, and very little food. The shelter director told me she asked the children what they had eaten there, and they said, “Juice and cookies.” That was a snack, she’d said. What did they eat for meals? “Juice and cookies.” Three times a day. For 21 days, sometimes longer.

The children needed the name and contact information for a sponsor. But sometimes the sponsor would turn out not to be safe — yet another human trafficking operation. Sometimes a sponsor didn’t have a phone or computer, so it could take months to settle the paperwork by mail. Sometimes the girls were pregnant when they arrived. The shelter focused on caring for the neediest cases, the youngest children traveling alone, the sickest, the siblings who needed to be kept together, the teenage mothers who required extra care.

After the refugees had received 7 days of medical care and been given clearance, they could come to the farms where I work, and we would focus on learning English names for the foods and animals, and discovering the differences between organic agriculture here and in their home countries. We compared the ways we keep domesticated animals, and what grows in the Northeast that doesn’t in Central America. The children were always hungry, and they loved apples that grow here. “Manzanas!” they would cry out! They loved the cherry tomatoes too.

These children were kind, sweet, hardworking, generous, dedicated, committed, and excited to go to school. They were desperate to learn English, and to become citizens here. Each time they left the farm, they hugged me tight and thanked me deeply. They were the warmest children I have ever encountered, so polite and decent, and so eager to participate. These children have witnessed atrocities no human should ever have to witness, and they are — or were — safe here.

Sometimes they talked about swimming across a river to get to the border, and seeing people around them swept away and drowned. They whispered about how it felt when they were caught, how they thought they were going to their own funeral. People around them sometimes died of thirst. And yet, despite all they had seen, they were resilient, as children are. They could still smile, their eyes still sparkled, they could laugh and be silly. The shelter director told me that always their first request upon arrival was to go to church; they were always so conscious of giving thanks for what they had received.

During the three years they attended my programs, I watched them transform. At first fearful and uncertain, they soon knew they were loved and welcomed. When we entered the barns, a boy would sniff the air and smile and say, “Ah! I missed the smell of cows!” A girl would light up as she entered the chicken coop to gather the eggs. I would ask them how they were feeling as we hiked up a hillside to the farm fields and they would tell me, “Free, I feel free. And happy.” They would have a whole new life here, one they deserve, as all children do.

Often I wondered how their mothers were able to let them go. I knew they could only have done it if they knew it was their child’s only chance to survive, to be educated, to be safe, to be free.

A few weeks ago, these children were here at the shelter. Now, because of the federal government’s decision to cut their funding, they are gone. They sobbed before leaving the shelter, full-grown boys were shaking with fear. They know what they are going back to, just as they were about to achieve legal status here. Of course it would be much better for these children to live safely in their home countries and have a life of their own choosing. What child would choose to leave their families and their homes if they didn’t have to? They were here because they couldn’t stay there.

This past September, I had the luck to bring three refugee children to the United Nations for the International Day of Peace. My students had been invited to present our Children’s Peaceful Garden project, as representatives of the Jane Goodall Institute’s Roots & Shoots project, to a gathering of dignitaries and 700 students, in the General Assembly. The refugees had received a special invitation to be a part of this gathering. They proudly carried the flags of their nations in the ceremony, with tears in their eyes. Always have I seen in their art projects and letters, how they would include the colors of their flag, and in writing proudly refer to themselves as 100% Chapin (Guatemalan) or Catracho (Honduran) or Guanaco (El Salvadoran). These refugee children have been resettled now, legally in this country, and they know where they are from.

One day I took the children to meet a man from El Salvador who opened his own coffee shop. A local teenage girl living in the shelter asked the coffee shop owner from El Salvador, “Is it really as bad there as these kids say it is?” He looked at her solemnly. “Yes,” he said, “yes it is.” She nodded. And only a few days later, this teenager watched as the refugees were removed from the shelter, a victim of a policy that is put into place by a distant bureaucrat who has likely never been to El Salvador, isn’t aware of the situation, and doesn’t care to be. “I know how they feel,” the girl said as the shelter children wept, holding onto each other. “I know what it’s like to be taken from your home in the middle of the night.”

What can we do now for the children who will not have the chance for resettlement? Perhaps it is not about what we do, but what we don’t do. We must not give in to the sense of helplessness. We must not give up on our beliefs. And we must continue to educate children for the future, to teach them to use their voices, to speak up for love and tolerance, to protest against greed and hatred, to use their power to vote and petition. We must teach them to remember what really matters, and do everything they can to help make this world a better place for all human beings.